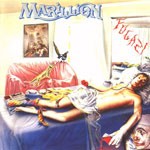 So you resigned yourself to failure, my friend
And I emerged the chilling stranger, my friend
To eradicate the problem, my friend
Unsheathe the blade within the voice

And what do you call assassins who accuse assassins anyway, my friend?

Washing machine, pinstripe dream
Stripped the gloss from a beauty queen
Found our nest, in the Daily Express
Met the vicar in a holy vest

Brought up the children Church of E
Now I vegetate with a colour TV
Worst ever thing that ever happened to me
Oh, for D.I.V.O.R.C.E., oh Judy

Who left the cap of the toothpaste tube
Who forgot to flush the loo
Leave your sweaty socks outside the door
Don't walk across my polished floor, oh Judy

Propping up a bar, family car
Sweating out a mortgage as a balding clerk
World war three, suburbanshee
Just slip her these pills and I'll be free

Stand straight, look me in the eye and say goodbye
Stand straight, we've drifted past the point of reasons why
Yesterday starts tomorrow, tomorrow starts today
And the problem always seems to be we're picking up the pieces on the ricochet

Drowning tequila sunsets, stowaways on midnight ships
Refugees of romance plead asylum from the real
Scrambling distress signals on random frequencies
Forever repatriated on guilt laden morning planes
We are pilots of passion sweating the flight on course
To another summit conference, another breakfast time divorce
Screaming out a cease fire, snow-blind in an avalanche zone

Stand straight, look me in the eye and say goodbye
Stand straight, we've drifted past the point of reasons why
Yesterday starts tomorrow, tomorrow starts today
And the problem always seems to be we're picking up the pieces on the ricochet

Are we trigger happy?
Russian roulette in the waiting room
Empty chambers embracing the end
Puzzled visions haunt the ripples of a trevi moon
Dream coins for the fountain or to cover your eyes
We reached ignition point from the sparks of pleasantries
We sensed the smoke advancing from horizons
You must have known that I was concealing an escape

To be the prince of possession in the gallery of contempt
Suffering your indiscreet discretions and you ask me to relent
As you accumulate flirtations with the calculated calmness of the whore
I am the harlequin - diamonded costume dripping shades of green
I am the harlequin - sense strangers violate my sanctuary
Prowl my dreams
Plundering your diaries, I'll steal your thoughts innocence
Ravaging your letters, unearth your plots innocence

To don the robes of Torquemada, resurrect the inquisition
In that tortured subtle manner inflict questions within questions
Looking in shades of green through shades of blue
I trust you trust in me to mistrust you

She crucified my heart in the depth of a satin grave
As I lay in sweating monologue I sensed the lovelight fade
Within the spiral of the cigarette
You betrayed your bedside etiquette
I saw the lizard, I saw the lizard
I touched the lizard with the crimson veil

I've seen a different doorway shut a million times before
The smiling she chameleon, the smiling vinyl whores

When footlights dim in reverence to prescient passion forewarned
My audience leaves the stage, floating ahead perfumed shift
Within the stammering silence, the face that launched a thousand frames
Betrayed by a porcelain tear, a stained career

The darkroom unleashes imagination in pornographic images
In which you will always be the star, always be the star, untouchable
Unapproachable, constant in the darkness
Nursing an erection, a misplaced reaction
With no flower to place before this gravestone
And the walls become enticingly newspaper thin
But that would be developing the negative view
And you have to be exposed in voyeuristic colour
The public act, let you model your shame
On the mannequin catwalk, catwalk
Let the cats walk, and the cat walks

You can't brush me under the carpet, you can't hide me under the stairs
The custodian of your private fears, your leading actor of yesteryear
Who as you crawled out of the alleys of obscurity
Sentenced to rejection in the morass of anonymity
You who I directed with lovers will, you who I let hypnotise the lens
You who I let bathe in the spotlights glare
You who wiped me from your memory like a greasepaint mask
Just like a greasepaint mask

But now I'm the snake in the grass, the ghost of film reels past
I'm the producer of your nightmare and the performance has just begun
It's just begun

Your perimeter of courtiers jerk like celluloid puppets
As you stutter paralysed with rabbits eyes, searing the shadows
Flooding the wings, to pluck elusive salvation from the understudy's lips
Retrieve the soliloquy, maintain the obituary
My cue line in the last act and you wait in silent solitude
Waiting for the prompt, waiting for the prompt

You've played this scene before

Vodka intimate, an affair with isolation in a Blackheath cell
Extinguishing the fires in a private hell
Provoking the heartache to renew the licence
Of a bleeding heart poet in a fragile capsule
Propping up the crust of the glitter conscience
Wrapped in the christening shawl of a hangover
Baptised in the tears from the real

Drowning in the liquid seize on the Piccadilly line, rat race
Scuttling through the damp electric labyrinth
Caress Ophelia's hand with breathstroke ambition
An albatross in the marrytime tradition
Sheathed within the Walkman wear the halo of distortion
Aural contraceptive aborting pregnant conversation
She turned the harpoon and it pierced my heart
She hung herself around my neck

From the Time-Life-Guardians in their conscience bubbles
Safe and dry in my sea of troubles
Nine to five with suitable ties
Cast adrift as their side-show, peepshow, stereo hero
Becalm bestill, bewitch, drowning in the real

The thief of Baghdad hides in Islington now
Praying deportation for his sacred cow
A legacy of romance from a twilight world
The dowry of a relative mystery girl
A Vietnamese flower, a Dockland union
A mistress of release from a magazine's thighs
Magdalenes contracts more than favours
The feeding hands of western promise hold her by the throat

A knight for Embankment folds his newspaper castle
A creature of habit, begs the boatman's coin
He'll fade with old soldiers in the grease stained roll call
And linger with the heartburn of Good Friday's last supper

Son watches father scan obituary columns in search of absent school friends
While his generation digests high fibre ignorance
Cowering behind curtains and the taped up painted windows
Decriminalised genocide, provided door to door Belsens
Pandora's box of holocausts gracefully cruising satellite infested heavens
Waiting, the season of the button, the penultimate migration
Radioactive perfumes, for the fashionably, for the terminally insane, insane
Do you realise? Do you realise?
Do you realise, this world is totally fugazi

On the rebound, fumbling all the lines
The light at the end of the bottle - alcoholic alphabet
Through the looking glass the proof in my own reflection
Five senses down and reeling on the Cinderella search

On the rebound, fumbling all the lines
Decay on the vertical hold with a horizontal aim
Conversation needs translation
Three dimensions down dissolving on the Cinderella search, Cinderella search

On the rebound, fumbling all the lines
Dreaming bartenders, bourbon and saxophone
Out of luck, out of charm, out the game of rejections in a cigarette city
Only courting the homing of direction on the Cinderella search, Cinderella search

Maybe it was infatuation or the thrill of the chase
Maybe you were always beyond my reach and my heart was playing safe
But was that love in your eye I saw or the reflection of mine?
I'll never really know for sure, you never really gave me time
Give me time, won't you give me that time!

Welcome back to the circus!